Their paths kept crossing - first by chance, then by choice.  Jimmy Koplik was a gatekeeper at rock’n’roll shows in New Haven, CT, a young man barely in his 20’s.  Michael Bolton was a local, neighborhood wannabe, barely 20, with hair down his back and a band called Blackjack looking to break through. On more than one occasion, Koplik would allow Bolton to slip in to see a show.  There was something about him, Koplik recalls, which said “star.”

Years later, they each found themselves in Stamford, CT, raising young families.  Koplik was moving briskly up the ladder as a soon-to-be very well-known promoter in the music industry.  Bolton was in the midst of a nearly 20 year quest to gain traction in the industry.  Their families soon became acquainted.  Each had a daughter attending the same elementary school.  They’d find themselves watching the same 5th grade school plays.  It was evident, even then, Koplik recalls now, whose dad was the entertainer, and whose was the promoter.

The friendship took hold and grew through the years.  Which is why Koplik understands, as well as anyone, Bolton’s heartfelt desire to help those in need, which led to the founding and continuing work of The Michael Bolton Charities for nearly three decades.

“Where he grew up impacted who he was.  He is a passionate and compassionate person, and he personally cared.  And when he believes in something, he’s driven,” Koplik explains.  “It’s not just putting his name on it.  He gets personally involved in the cause, and does so out of his heart.  It’s inspiring.”

Koplik and Bolton have maintained their friendship through the years, and Koplik has been proud to donate to The MBC, supporting its growth and helping to enable all that has been achieved to respond to domestic violence and those affected by it.

Building on The MBC’s support of organizations providing services to children and women at risk in his Connecticut, New York and around the country for nearly 30 years, The MBC developed the Beyond Trauma: Youth Music Therapy program more recently.  That the program began in New Haven, and has earned high marks for its impact on young people, comes as no surprise to Koplik, who has supported it from day one.

“He started it locally where he grew up, and wants to grow the program to help more young people.  He understands what music can do, he appreciates it – he’s a musician, he’s a song writer, he gets it.  It’s his personal stamp reaching out.  He knows that music can make that unique connection and can help to turn a life around.”

Koplik has also spent his life immersed in the music industry, most recently as the highly regarded President of Live Nation for the Connecticut and Upstate New York Region.  He too has seen first-hand how impactful music can be.

“Most kids love music.  It’s more acceptable than books or words.  It can be therapeutic, but kids don’t look at it as therapy.  There’s no doubt in my mind that there’s a magic to that,” Koplik said.  “The biggest smiles I see are people walking out after attending a concert.  You’re part of it, you feel it.”

At fundraising events through the years, Koplik and his family, including his now-grown children, were frequent participants, lending support and reconnecting amidst schedules that had them, quite literally, here, there and everywhere.

Koplik’s children vividly recall the friendship between their parents and Bolton; daughter Emily remembers being in the same grade as one of Bolton’s daughters – and the dads crossing paths at those school plays.  She and her brother Jeremy agree that the friendship between their parents and Michael Bolton was not built around celebrity, but genuineness – a common interest in the music business for sure, but also centered on family, and children, and education, and helping others in need.  “They stayed close, all through the years,” recalls Jeremy. 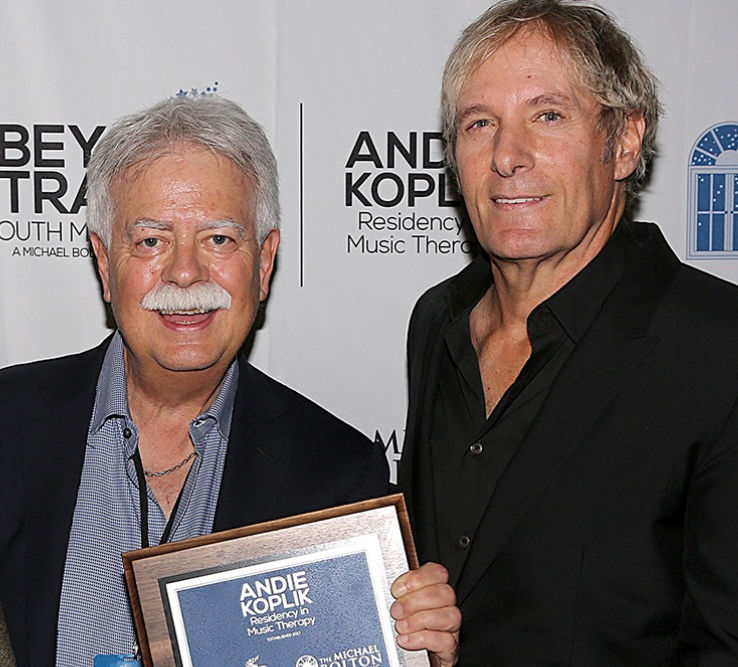 Shortly after the launch of the groundbreaking music therapy program, Koplik’s wife Andie, passed away suddenly in 2017.  An educator with an impressive 32-year career teaching generations of 2nd graders – all spent in a single same classroom - she had been devoted to young people, earnestly helping them to fulfill their individual potential. Visiting her classroom, her children recall, was always a joy-filled adventure.

To honor her memory and life’s work, at Michael’s urging The MBC established the Andie Koplik Residency in Music Therapy, to be sustained by the program’s skilled music therapists. “Music and education have always been part of the fabric of our family,” Emily explained.  “The music therapy program is a gift to the students who participate, and naming the Residency was a gift to us.  She would have loved to have been a part of it.  She never lost her love for teaching students, and she’d be so proud.”

Of Bolton’s decision to establish the Residency in her name, Jimmy Koplik says “I was completely taken by surprise.  It is the nicest thing that has ever happened to me.  It means that her legacy will continue. And it provides wonderful insight into The Michael Bolton Charities, and Michael Bolton. ”

The Koplik family enthusiastically supports the innovative program, as the next generation of Koplik children, and donors of every age, learn how it helps children in need, influencing their lives for the better.

That’s what Andie Koplik was all about.  Making a difference in the lives of young people.  And as a central element in its unrelenting efforts to respond to the devastating effects of domestic violence and trauma, that too is what The Michael Bolton Charities is all about.

Jimmy Koplik, described as a “legendary concert promoter” in the media, has been an industry leader for 50 years.  Live Nation owns and operates the Oakdale Theatre in Wallingford, CT and the Xfinity Theatre in Hartford, and promotes and produces shows at the XL Center in Hartford and other venues across the region. 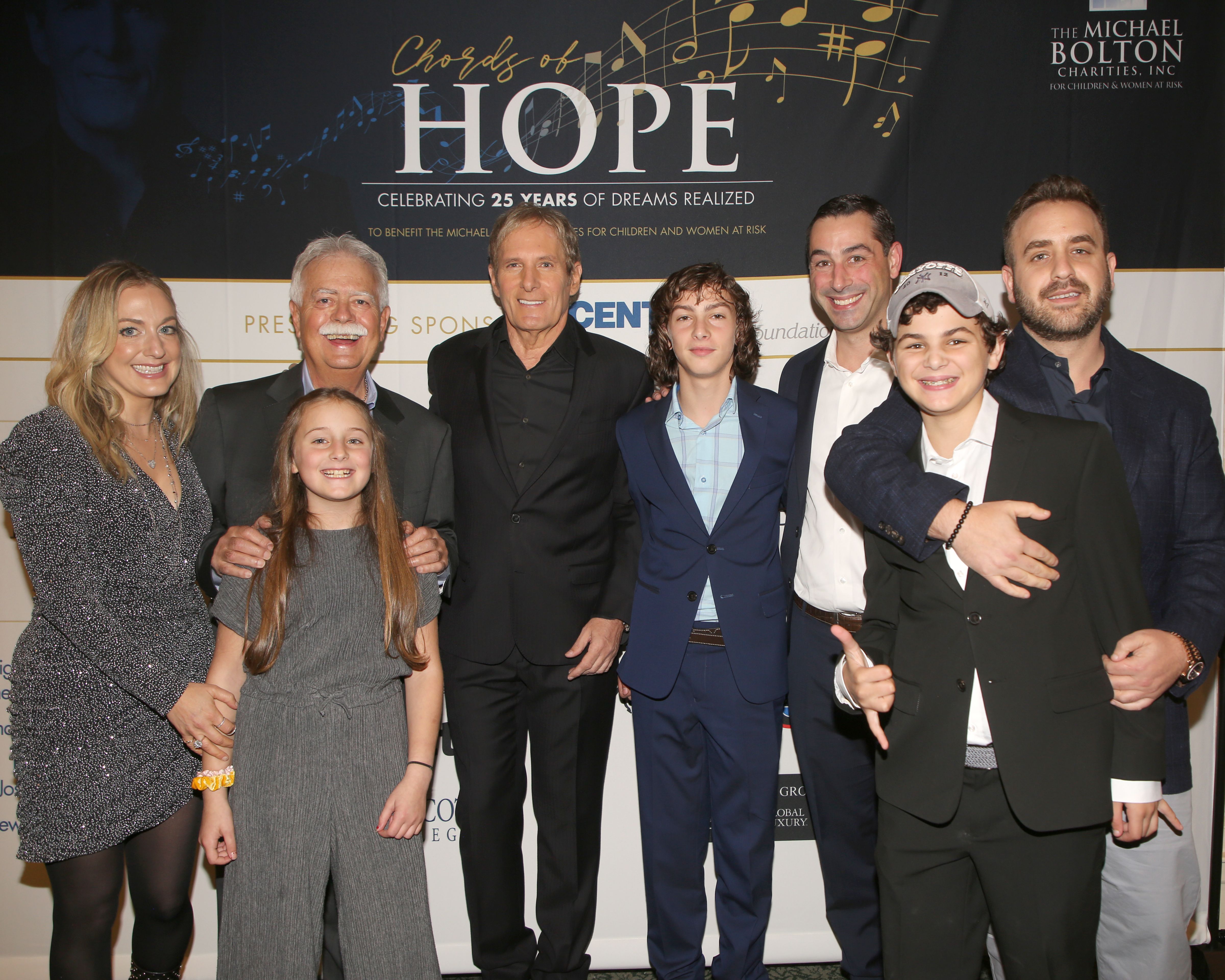