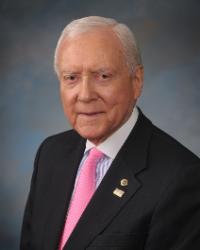 Condolences to the family, friends and colleagues of former Senator Orrin Hatch (R-Utah) who died at age 88 this week.  Hatch had a distinguished and impactful career, and was the longest serving Republican Senator in history – nearly four decades.  He retired in 2019.   As Michael Bolton wrote in his book The Soul of It All: My Music, My Life in 2013: “The (Violence Against Women Act) was co-authored in a bipartisan effort by Senator Orrin Hatch and then Senator Joe Biden, who shared the conviction that our laws need to be clear on protective measures for women in abusive situations.  This is a perfect example of our democracy at work and at its best.  Members of Congress from both sides of the aisle found common ground and created legislation that truly benefits those who have no power or clout. Many say that this vital legislation was one of the highest achievements of these two political leaders, since this law will help break the cycle of violence that has damaged and even ended the lives of innocent women and children.”  The MBC was honored to present Senator Orrin Hatch with the "Michael Bolton Charities Lifetime Achievement Award" in 2006.

search shows that victims of domestic violence can sustain head trauma more often than football players – hinting at a hidden epidemic of brain injury in women, according to a feature article in The New York Times Magazine, published on March 6, 2022. The articled noted that the “Centers for Disease Control and Prevention estimates that one in five women in the United States experience severe intimate-partner violence over the course of their lifetimes, resulting in physical injures, most commonly to the head, neck and face.  Concussions are likely to appear with alarming regularity.”  Harvard university associate professor Eve M. Valera estimates the “number of annual brain injuries among survivors of domestic abuse: 1.6 million.”  Unlike injuries in sports, war or accidents, the Times points out, “domestic assaults happen almost entirely out of view.” In 2019, the National Institutes of Health began funding a study using brain imaging and other tools to understand the health impacts of traumatic brain injuries on domestic-violence victims, and this year the CDC plans to begin collecting data, The Times articles explains.

With only days remaining in the current session of the Connecticut legislature, action on key legislation that would enhance support for victims of domestic violence is awaiting agreement between the Senate and House. The legislation, if approved, would appropriate $1.44 million in the 2023 fiscal year to fund 18 domestic violence child and family advocates at agencies statewide, and enhance workplace protections for victims of domestic violence, among other provisions.  Testifying in support of the bill, Senate President Pro Tempore Sen. Martin Looney (D-New Haven) said that children and adults fleeing family violence face limited options as they seek help. “Too often,” Looney said, “the adult victims of domestic violence are forced to miss work to address the physical and mental health demands, divorce implications, temporary homelessness, financial fallout and these already suffering people should not lose their jobs as a second injustice.”